You are here: Home / About

Foster a spirit of partnership within Virginia’s tourism and motion picture industries.

Love is Integrity, Passion, and Results.

Integrity: Be the Best You 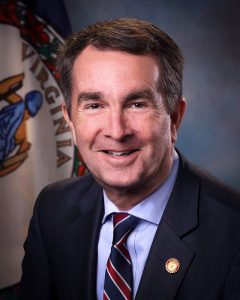 Before he was inaugurated as the 73rd Governor of the Commonwealth of Virginia, Ralph Northam served as an Army doctor, pediatric neurologist, business owner, state Senator and Lieutenant Governor.

A native of Virginia’s Eastern Shore, Governor Northam was educated at the Virginia Military Institute (VMI), where he graduated with distinction.

After graduation, Governor Northam was commissioned as a second lieutenant in the United States Army. He served eight years of active duty and rose to the rank of major.

He attended Eastern Virginia Medical School and then traveled to San Antonio for a pediatric residency, where he met his wife Pamela, a pediatric occupational therapist at the same hospital.  Governor Northam did his residencies at the Walter Reed Army Medical Center and served as chief neurological resident at Johns Hopkins Hospital. As an Army doctor, he served in Germany, treating soldiers wounded in Operation Desert Storm.

When Governor Northam and Pamela returned home, they chose to build their life in Hampton Roads. He began practicing pediatric neurology at Children’s Hospital of the King’s Daughters in Norfolk. He established Children’s Specialty Group, his current medical practice, to provide expert pediatric care for patients. Governor Northam also served as assistant professor of neurology at Eastern Virginia Medical School, where he taught medicine and ethics.

Governor Northam volunteered as medical director for the Edmarc Hospice for Children in Portsmouth, where he spent 18 years caring for terminally ill children.

Governor Northam approaches public service with the same passion he brought to his military and medical service.  He is committed to working with leaders from both parties to build a Virginia that works better for every family, no matter who they are or where they live.

This website uses cookies to improve your experience while you navigate through the website. Out of these, the cookies that are categorized as necessary are stored on your browser as they are essential for the working of basic functionalities of the website. We also use third-party cookies that help us analyze and understand how you use this website. These cookies will be stored in your browser only with your consent. You also have the option to opt-out of these cookies. But opting out of some of these cookies may affect your browsing experience.
Necessary Always Enabled

Any cookies that may not be particularly necessary for the website to function and is used specifically to collect user personal data via analytics, ads, other embedded contents are termed as non-necessary cookies. It is mandatory to procure user consent prior to running these cookies on your website.